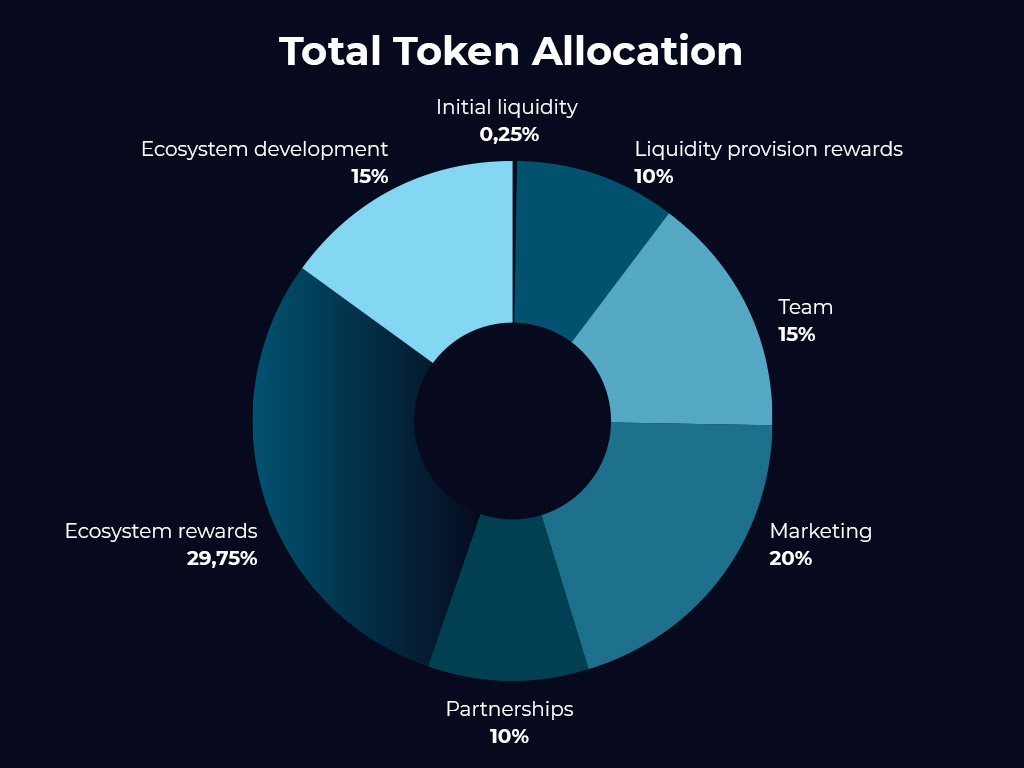 Paired with $100.000 to fund initial liqudity pool on Uniswap

1 month cliff after which 2% is released each month

3 months cliff after which 2.5% is unlocked each Q (depending on the needs this number can be less and average will never cross 2.5% per Q)

1% TGE; variable vesting to be adjusted to the needs of the platform (at first decided by the Team later by voting); max 7.5% per Q, 20% per year – max vesting not set

1 month cliff after which 1% is released each month

100% of the initially provided liquidity to the Liquidity Pool is locked for 12 months.

The tokens allocated for operations, development, marketing, and the team will be vested for 3 years with a quarterly release.

From the total amount of PRIMARY tokens transacted on the platform, 10% will be moved to the vault for 1.5 years on the basis of a linear vesting scheme. After reaching this cap, a portion of these tokens is intended to be partially subjected to locking or quarterly redistribution as reflections to holders through a DAO proposal initiated by a separate governance token. The rest of the amount shall be used to support the expansion of the PRIMARY ecosystem, the incentivization and growth of our global community, liquidity, bounty tasks, the financing of ambassador programs, the new development features, marketing, partnerships, and sponsorships of startups.

Add PRY to your cryptocurrency portfolio

Benefit from multiple reward programs and stake your PRY either on Ethereum or Binance Smart Chain. Each of the staking programs offers different incentives in addition to the network’s liquidity provider fees. Choose between MetaMask on Uniswap, Bancor, and Pancakeswap to stake PRY.

Imprint | Privacy
We use cookies to ensure that we give you the best experience on our website. If you continue to use this site we will assume that you are happy with it.OkRead more